Not much happening on the car, touching up the 12 volt battery occasionally.
This spring i measured all the cells after my mishap of discharge, I had charged them to about 80% and let them sit all winter. I found cell 28 was discharged but all the rest were 3.33v.
So it appears I have lost two cells from the discharge accident, and I have not done capacity testing, I had found some new old stock cells and bought a few so I will replace my bad cells.
Currently I am on the fence about keeping, selling, or parting the car as I have far too many projects in the mix and work is taking a lot of time as well
Posted by Jerry at 8:27 AM 4 comments:

I have been busy with work and holiday schedules but made it out to the garage to check on the batteries.
I took some readings after charging and letting the batteries rest for a few weeks, I found that one cell had dropped to nearly zero and the other 49 were at 3.31 +/-.
I managed to work the cell out without full disassembly of the rear pack and install a spare cell that came with the original set of batteries.
I put it on charge and cut the charge off when the cells all read about 3.51. I would have fully charged, but wanted to watch the finish due to no BMS, I will come back to this when I have some time to monitor things.
Posted by Jerry at 2:04 PM 5 comments:

Since it had been a while since I checked on all the vehicles I thought I would check charge on the car and other projects. I turned on the Mazda and... NOTHING, not a good feeling.
The batteries were all at less than 1 volt, I assumed I had destroyed the battery pack.
I put the plugged in the charger and the voltage came up to 2.5v a cell quickly.
I charged for 10 hours at about 8 amps, so far the voltages are very close and holding, I have yet to take it for a test drive and check the capacity.
I wanted to bottom balance the pack, but not like THIS! I am not holding much faith that the pack is good as the voltage is never supposed to go under 2.5v a cell.
The lesson learned, even though I had good intentions on checking the charge, I should have disconnected the pack.
I guess I will find out if you can fully deplete a Lithium battery and bring it back to life.
Posted by Jerry at 7:28 AM 2 comments:

Due to crazy schedule the car hasn't seen too much action, but a few things need to be attended to at this point. I drove the car a few times and noticed the current limits much sooner that it had before. I checked the controller setting and connections to no avail.
I drove the car for a while and it got a lot worse, the range is down to about half as well. I drove until out of power and checked all the battery voltages, and as expected I had a few very low cells.
I had never balanced the batteries and am not running a BMS so I was not overly surprised.
I decided to charge the car and see how many amp hours that it charged, the next day I check the meters and discovered the amp hour meter was no longer working, so much for the information I was hoping to gain. Plan B was in effect, I used my powerlab 8 and discharged the previously low cells to check capacity, it looks like 8% loss from new. This was not too troubling as I bought the batteries used and they have some age. I decided to charge every battery with the powerlab and note the charges.
After a week of moving charger leads, I found that on average I was able to put 9AH to 9.5 AH in each battery.
I had ordered a new meter assuming the old one was a goner, I should have done some troubleshooting first, seems the dc/dc converter isolated supply had died, meter ok. I now have a spare meter..oops.
The next mission is to drive the car and check the range and current, to see if anything has changed.
I will have to bottom balance the batteries as some point or buy a BMS system to take care of things.
I have yet to get the chargers swapped out, I have a Vectrix conversion I am working on as well and have the batteries for the quad to replace as well.
Posted by Jerry at 7:23 AM No comments:

Not a lot of new stuff happening with the freezing temps and too much snow.
I have found some brake issues, I changed the rear caliper but the problems continue and a new master cylinder has been ordered and received. The work had slowed due to weather and injury from an auto accident keeping me sidelined for 4+ weeks.
The PFC50 charger and J1772 interface is not installed yet and the brake issue hasn't been resolved.
I have been looking at options to cover the rear batteries that would be lighter than the aluminum plate I contemplated using. I am favoring Lexan but not loving the price for the thickness I may need for the package area. 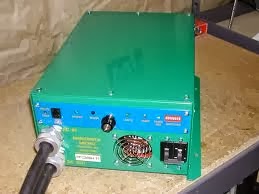 The charger may fit well into the spare tire space, I would like to offset the 33 pounds by removing something from the car, not sure what that would be yet...
Posted by Jerry at 3:50 PM No comments:

I finally got around to changing the tires to the proper size, no more nasty noises on bumps and lower rolling resistance as well. I made an appointment to get the alignment done on all four wheels, as it turns out, the alignment was out significantly.
I decided to upgrade the charger, as the existing charger was not putting out full power.
I found a charger on Ebay that will work, with the added benefit of providing ability to charge from public charge points with an added interface.
I have many projects left for this winter, I need to finish the rear box cover and reinstall the interior. The brakes need to be replaced in the rear, the dash finished and stereo install completed to name just a few.
﻿
Posted by Jerry at 3:19 PM No comments: 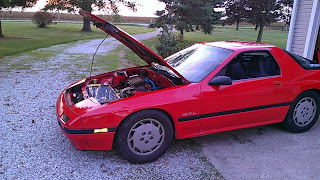 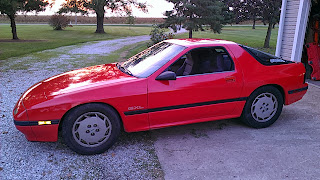 Getting ready to roll, got the body cleaned up a bit. I will eventually get it repainted, but going to drive it for a bit first.
Posted by Jerry at 6:32 PM 1 comment: